LONG POST ALERT (Way too many pictures of the kid)

It was a rush to get there in time.  The program advice was for me to stay with Anneke until lunch and then take her home.

Well, we got there and Anneke was off.  She went and introduced herself to everyone (I have taught her to say “Ik ben Anneke”).  She found the kiddy kitchen and proceeded to make pannekoek for everyone.  The other girls thought it was a great game and they joined in, in fact, one went off in search of some poedersuiker (sugar).

There were 3 teachers for 14 children, very different from Anneke’s experience with our lovely family daycare angel, Miss Tania.

The children sat in a circle and sang their morning song.  No need to fret that Anneke didn’t know the words, or the tune – she just got up and did an interpretive dance instead (much to everyone’s amusement).

She is by far the youngest child there.  The teachers only speak Dutch to her (at our request, unless there’s an emergency) and the other children find other ways of communicating (grunting, pushing or in Anneke’s case dancing and fake laughing).

The children were asked to wash their hands. Off Anneke trotted, full of false bravado – until one of the older children just pushed her out of the way (I would have too, she was pretty slow).  Anneke will soon enough get to know the pecking order.

After morning song, Baas (the cook) came in to teach them how to make cookies.  He gave each child a knob of butter, threw some flour on the table and literally cracked eggs from a great height and the children went crazy making the dough.

Once the dough had been rolled into balls ready for baking, the children had morning tea.  There was lots of banter and laughing.  Anneke had no idea why they were laughing, but that didn’t stop her from joining in… with gusto! 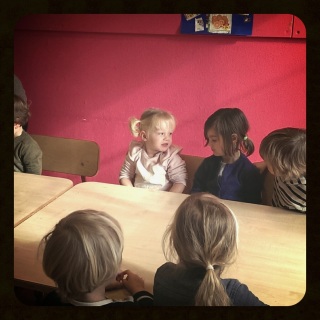 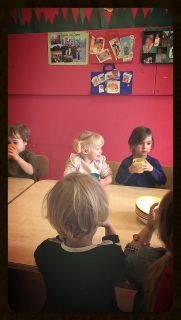 Finally, outdoor play.  Anneke asked Franca (the teacher) to help her with her jacket and it wasn’t even fastened before the kid was out the door and at the top of the biggest slippery slide I have ever seen.  I couldn’t watch.

The teachers all agreed that it was time for me to go now.  I said my goodbyes to Anneke, who started howling until I explained that she could stay.

I went off for tea and collected her two hours later.  She goes back on Thursday and the teacher thinks that she will be okay to stay all day.

Maybe it’s pre-school, or maybe it’s the Dutch (or maybe a bit of both) but the children are expected to be so much more independent.  The teachers are there to supervise but they don’t have the time to tend to each child’s need.  I could see Anneke wanting to ask questions, but the teachers were busy – she didn’t seem to mind. It’s nice to see.  The teachers let the children fight over toys (supervised) so that they work out their own solution, it was hard to watch.  I saw a little girl snatch the toys from Anneke because it was pack up time – and she was right, but again, it’s tough to see. The children were running all over the playground (which the preschool share with the primary school, so it’s massive).  Anneke was up so high, I couldn’t cope – but she did it, she tried and she succeeded.


It’s a completely different experience from Miss Tania’s (our family day care angel).  Anneke misses her very much, she still prays for Miss Tania, Jack and River.  I hope she makes some new friends here.

2 thoughts on “SUCCESS : A retrosepctive look at Anneke’s first day at Preschool.”