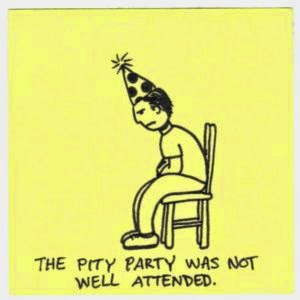 Dave flew out for a week in San Jose (‘do you know the way …?’), Anneke and I were up early to farewell him.  We got ready for playgroup but when time came to leave, the heavens opened.
I have been looking for raincoats for both us for months now, and procrastinating.  My mistake.
We had to forgo our trip to playgroup.  So, we spent the morning inside.  Miss A pottered with her toys and I did some washing and cleaning.  However, as we live in a shoebox, there’s not really enough housework to keep me occupied.  By 1000 all was done.
I was bored.  Super bored.  I started my own pity party.  Throwing questions around such as “is this it?  Is this my life?  Sitting around the house?”.  I had messaged a few friends, but they were either busy or at playgroup.  I couldn’t get out anyway, the rain saw to that.

Miss A then went down for her 3 hour nap.  Booring….  I have been waiting for Miss A to settle into preschool and tomorrow is her first full day (until 3pm).  And because I’ve been waiting, I haven’t started anything or committed to anything.

I thought, what would I be doing if we were in Sydney.  I would be on the phone to my sister, a girlfriend, playing with the dog, gardening  or out for coffee with my mates at the beach. Actually, let’s be honest, I’d probably be mopping the floor for the second time that day, doing the washing, cleaning the windows etc.
This afternoon we went to the park and Miss A met a new friend, who told me that she and Miss A were ‘friends forever’.  If only making friends as an adult was so easy.
So apart from the grandparents of Miss A’s new ‘forever friend’, I officially didn’t speak to any adult today.  How depressing.
Anyway, my pity party lasted only a few hours, a couple of the members of the playgroup texted to say that I had been missed and would I like to catch up another time this week.  Another friend messaged to say she heard Dave was away and would we like to come over for an afternoon playdate and stay for dinner.

Things are looking up.